Women of Character – My Han Solos

“I don’t want to be Princess Leia!”

If you had been among the small group of neighbourhood boys with whom I played Star Wars, back in 1977, you would have heard this phrase a lot. We were, like most kids who were eight-years-old when Lucas’s opus came out, obsessed with Star Wars. For me, our re-creation of the world of Luke Skywalker was not just play, it was a portal to another dimension, a chance to become a swashbuckling space hero.

The only setback to playing Star Wars was that, as the group’s only female, I was always cast as Princess Leia when I really—I mean really, really, really, REALLY—wanted to be Han Solo.

Don’t get me wrong, Leia was great. She was spunky, intelligent, and ended up rescuing her rescuers with that crazy gargbage chute escape. (How was she supposed to know a tentacled monster lived down there, or that the walls would slowly start compacting the trash?) But let’s get real, Leia was a princess. She wore a dress (gown?), she pleaded to Obi Wan Kenobi for help, and she was selflessly devoted to her cause. Sharp tongue aside, Leia was about being good, pure, and sacrificing everything for the well being of others. As women are supposed to do.

Okay, okay, I’m being a bit hard on her but I (really) wanted to be Han Solo. There were no female Han Solos out there. Have a look and then  tell me you don’t see the difference… 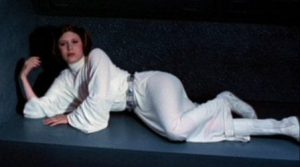 Compared to some of the other fictional role models out there, however, the difference between Han and Leia was minimal. I was a child of the 70’s and 80’s, which meant I grew up with sci-fi/fantasy images like this:

You are all free to grovel naked at my feet!

Occasionally, fictional females could be brave, intelligent, sassy, and strong, but they had to do all that behind the real heroes—the men. Even one of my all time fave TV shows, Battlestar Galactica was not immune to this. 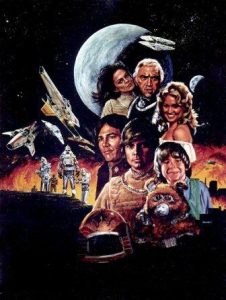 If only Starbuck was a woman. Well, maybe one day…

Or, females could be the heroes, but they also had to be really pretty and wear dresses and makeup and have awesome hair. They usually had a male overseeing them, too. Why? Because they were women. Duh.

It wasn’t until the late 80’s that fictional female heroes who didn’t conform to the stereotypes started to show up on my radar. I will never forget this moment:

More and more, fictional females would start taking the lead. Some would even replace their former male counterparts. 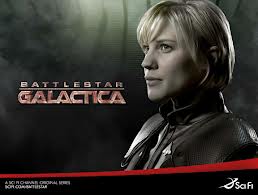 Lookee there, Starbuck is now a woman!

When I created the character of Ama Kalder, for Warpworld, I wanted her to be the kind of woman eight-year-old me would have been happy to play. Because of that, Ama swears, she drinks, she fights, she can’t cook worth beans, she hates dresses, she has her own boat, and she wants to do whatever the men do, no matter what anyone else thinks of that. Eight-year-old me would have loved Ama, I bet some of the boys would have wanted to play her, too.

Ama is not invincible. She’s also not a man loosely disguised as a woman, an important distinction. Nothing irks me more than the idea that in order to be a kick-ass hero a female character must rid herself of all female traits.

As the second book in the Warpworld series, Wasteland Renegades, undergoes the final polish before publication, I’ve been thinking about what makes a woman strong, both in fiction and in real life. In Wasteland Renegades, Ama’s independent and rebellious nature gets her into all kinds of trouble, and her strength is tested in a way she could have never prepared for. I think for most of us, women and men alike, we only find out how strong we really are when things are at their worst. Sometimes strength is standing fist-to-fist with an enemy, but sometimes it’s just holding on when the world tries to break you in hundreds of small ways.

Through my adult life, I’ve been lucky to connect with, and be inspired by, a whole crew of strong women. These gutsy females are leaders, adventurers, entrepreneurs, risk takers, humanitarians, and, in all cases, have taken the road less traveled. They live in every corner of the world and are all ages. They have been, and continue to be, my Han Solos.

Over the next few weeks, I’m going to share some of these amazing Women of Character, their stories and their words of wisdom with you. If you’ve got a Woman of Character story of your own, please share it with us. You never know who you might inspire.

As Han would say…

“Here’s where the fun begins.”