Bobbi powers lands a J3 Cub at her home in Laurel, Montana

Where do fictional strong women come from? Well, they are partly imagined, but they are also inspired by lots of real life women of character. At the end of Warpworld, readers meet Rider Pilot Shan Welkin, who is also known as a skyrider. Today, I’d like you to meet real life skyrider Bobbi Powers.

I met Bobbi on my first trek to Baja California Sur, Mexico, in 1998.  She was a pilot and a flight instructor, equal parts gutsy and sweet, and I liked her immediately. Since then, I’ve had the pleasure of sailing, flying, hiking, and back-roading with Bobbi and her husband, Dave. To top it all off, she makes a mean pie!

Kristene (in the back) getting ready for her first flight with Bobbi in Baja, Mexico

WWC: Thanks for joining us on the Warpworld Comms, Bobbi! In this blog series, we’re talking about women who, (like Warpworld’s female protagonist, Ama), have broken out of the expected gender roles, have been a little adventurous, or have lived boldly. What are some of the things you’ve done in your life that challenged what society believed women were “supposed” to do?

BOBBI: Ironically, it was my mom who set the most limitations on me.  Mom was a bookkeeper and a strong German woman. I swore she hated me because she told me every day of my life that I was “dumb, stupid, and would never amount to anything”. She continued that daily reminder until I was in my freshman year in school. My last memory of her reminding me of my shortcomings was at 35 years of age, when I was thinking of going to work at a bank.

At that time, I had 3 boys to raise on my own. I felt I needed a job that would not only support us but give me nights, weekends, and holidays off. I had no nice clothes to work at a bank, so I went to my older sister to see if she would loan me five dresses. I would buy one new dress each time I could afford it, and then return each borrowed dress, one at a time. 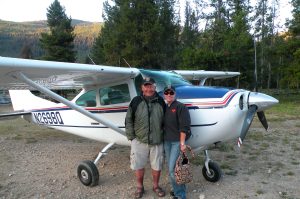 Bobbi and her husband Dave in the Idaho backcountry

When my mother heard my plan she told me there was no way I could go to work in a bank. I just wasn’t smart enough. Well, that made me even more determined, so I did. Which turned out great because that is where I met Dave and my lifetime dream of being a pilot came true.

My mother later changed from calling me dumb and stupid to ” the most stubborn bullheaded person she had ever known”. She would say, ” Don’t tell her what to do.”

WWC: What project or accomplishment are you most proud of?

BOBBI: Well, of course I am mostly proud of the three boys I raised.  A good part of that was on my own, and I am very proud of how they have all turned out.  All with successful careers, wives, and children. I am also very proud of marrying a man who was extremely supportive of my wants and dreams. Without him I would not be the person I am today. When I thought I couldn’t do something he was there to encourage me through every minute. Sometimes I would scream “I can’t, I am not smart enough”. He would just say, “Yes, you are, and you can”. Of my personal accomplishments I am most proud of my flying career. It has offered me so many opportunities and amazing adventures all around the world.

The tradition continues! Bobbi cuts out the back of her grandson’s shirt, to sign, after his first solo flight. A tradition started by WWII pilots.

BOBBI: My father. He was a pilot in WWII. I always loved his flying stories and had dreams of being a pilot someday. Also, my older sister. I was her little princess. I would have been a worse tomboy if it hadn’t been for her teaching me how to be a lady. I think she still shrieks at the things I do.

After finishing my CFI rating I went to San Diego and finished my twin rating. While I was working for my old instructor, as a flight instructor, I was offed a position flying a Citation 500 for a local bank. I was so excited that I went to the airport to tell my instructor the awesome news. He was so mad at me. He told me I thought I was hot shit and had no right going behind his back getting another flying position. I packed up my teaching supplies and walked out.

I got checked out in the Citation and from there I went to working for a commuter airlines. Flying for the airline was extra rewarding because the Metroliner is a difficult plane to fly. Flying out of Dallas Fort Worth airport was a challenge in itself, but the male pilots could hardly believe that a female could handle such an airplane.

WWC: Do you have a favourite female character–either in books, television, or movies? What do you like about her?

BOBBI: Yes, my favorite movie is “Always”. It is of course  a flying movie about fighting forest fires. Holly Hunter’s character, Dorinda, was pretty and tough but didn’t know it or show it. My favorite part is when she took one of  the airplanes her boyfriend was using for bombing fires. She was mad at him for taking dangerous risks. She was a terrible pilot and could barely handle the B25. The fact that the B25 used in the movie belonged to a friend also made it special

WWC: You also dive and sail, among other things. Can you tell us about one of your non-flying adventures?

BOBBI: Well, there was the time I drove a 2000 gallon fuel truck to a fire in Yellowstone National Park.

Dave was working the fire and knew that the Helicopters desperately needed fuel.  He told me I needed to get a driver for his truck and get a load of fuel up for the fire as fast as I could.

There were fires all over Montana that summer. The temperature was up to 110 degrees and had been for several days. Our only truck driver was in charge of our business while Dave was gone and could not leave. I called job service, checked unemployment service, the newspaper and everywhere I could for a driver but couldn’t find one.

I called Dave and he said I was just going to have to drive it myself. So the challenge was on. I had never driven a truck but had gone on many runs with Dave to do his deliveries. I asked our employee running the station where the fuel truck was. He told me it was at the airport. I told him to take me to the airport and teach me to drive the truck on the way back to the station, which was about 3 miles. That seemed to go fine so we loaded the truck with the 2000 gallons of jet A fuel and off I went for Yellowstone Park. Licensed and Legal, RIGHT? I figured it was worth the ticket I would get if they caught me and thank God they didn’t.

The hardest part was the tourists. I was amazed how they would stop in the middle of the highway to look out over a meadow to see a buffalo. Didn’t they realize how hard it was to stop a fuel truck with 2000 gallons of fuel? With a brand new driver behind the wheel, to top it off! I was glad when I finally made it to the fire and so were the helicopter pilots.

BOBBI: Determined, not willing to back down or quit. See a goal to the finish, whatever it takes.

[pullquote]Life is short live it to its fullest. Never let anyone take away your dream. You only limit yourself.[/pullquote]

WWC: What does the future hold for Bobbi Powers?

BOBBI: I have entered a new chapter in my life. New choices and new adventures lay ahead. I have been successful raising three fine successful boys. I have a business my husband and I have built together in aviation. We have discovered new places to explore in the Baja next year.

Thanks so much for talking to us, Bobbi. We’ll be looking for you in the skies! 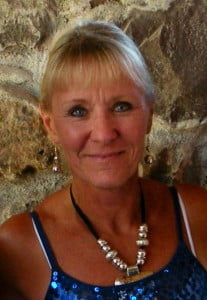 Bobbi Powers is a professional pilot, a job which has taken her on many adventures over the years. Born in a small Northwestern town in Montana, her father was a school teacher and her mother was an accountant. She currently lives on 25 acres, in Laurel, Montana, with her husband Dave. With a home, hangar for their  two airplanes, a private grass runway, and her three children and eleven grandchildren living close by, Bobbi likes to joke that she is spoiled.

Bobbi is still an active flight instructor but is always ready to take on any new adventuresome flying task.