The Truth Inside the Lie – Ira Nayman

In social situations, writers and psychiatrists have a similar problem of perception. People become wary when talking to psychiatrists for fear that the shrink will analyze everything they say. In a similar vein, people are wary of talking to writers for fear that they will become (unsympathetic) characters in a story. Knowing this, whenever I used to meet people for the first time, I would tell them not to worry, that I wouldn’t use anything they told me in my writing.

This is the story of how my attitude on this issue changed.

I was talking on the phone to a friend of mine who had a couple of weeks earlier returned from a vacation to Mexico with her fiancé. After a couple of minutes of small talk, she got to the heart(break) of the matter: while they were sitting on the beach, her fiancé turned to her and said: “I don’t know if I’ve ever loved you. But, I know that I don’t love you now.” Wedding off. Brutally.

I had been reading about women who created their own feminist rituals for dealing with life-changing moments, and I suggested that she create one of her own. Talking back and forth, she agreed to get a metal garbage can and make a bonfire of whatever objects of his she still owned. I remembered part of the Passover ritual was to go through the house the night before, collecting unkosher foods with a feather and a candle and reciting a prayer which said, in essence, “Hey, god, I tried my best to find all the unkosher food. If I missed something, cut me some slack, okay?” I suggested to my friend that she incorporate all of this into the ritual she was creating. She agreed. She didn’t need to understand the Hebrew words (my friend being a good Catholic woman); the prayer just had to convey to her the feeling that she needed to move on.

Unfortunately, I didn’t know the prayer off by heart. So, my friend rang off and contacted a Rabbi friend of hers who would know. While we were off the phone, I started thinking that this ritual could be an interesting part of a story. Around the same time, I had noticed that I had been loath to go to certain areas of my home city, Toronto, because they reminded me too much of a bad relationship that I had only recently gotten out of. Putting the two together, I wrote a story about a woman who is “haunted” by memories of events from her past when she goes to the places where they happened; the ritual is created for her to “exorcise” those emotional demons. (This story became the first episode of a seven part TV series I wrote about an organization that offers “Karnic adjustment and massage therapy” called Wine and Company.)

Well. When we got back on the phone (mission accomplished: my friend had the prayer), I asked my friend if she would mind if I wrote a fictional account of what had happened. Her response was: “Sure. I’ve always wanted to be in one of your stories, but I never knew how to ask.” And, I thought, Hmmmm. Now, when people learn for the first time that I’m a writer, I tell them that I cannot guarantee that anything they tell me won’t end up in something I write, but that if that prospect doesn’t delight them, they should keep in mind that it is usually combined with other elements so that whatever I use likely won’t be identifiable as part of their experience or personality.

So far, this seems to have worked: I get to write and have friends.

CODA: A couple of weeks after our telephone conversation, my friend actually did the ritual we had created in the basement of her church. The way she described the event to me, she was enthusiastically chanting and throwing objects onto the fire. A comb with her ex’ hair. An old pair of his underwear. A leftover can of shaving cream. An old – actually, that last one wasn’t such a good idea, as it blew up. No harm was done, but it did shake the church to its foundations. This last detail, as amusing as it was, did NOT make it into the script – who would have believed it? 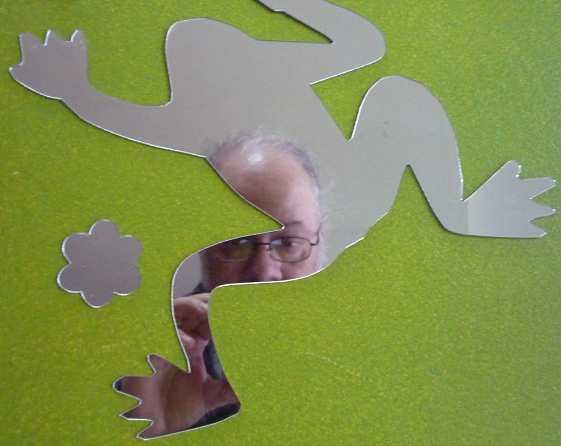 2013 has been a busy year for Ira Nayman. He self-published the fourth and fifth collections of Alternate Reality News Service articles, The Street Finds Its Own Uses for Mutant Technologies and The Alternate Reality News Service’s Guide to Love, Sex and Robots. His first novel, Welcome to the Multiverse (Sorry for the Inconvenience) was published by Elsewhen Press; the follow-up, You Can’t Kill the Multiverse (But You Can Mess With Its Head) is scheduled for publication in 2014. September marked the eleventh anniversary of his Web site of political and social satire,Les Pages aux Folles (updated weekly). You say you’ve never experienced Ira’s unique brand of humour, speculative fiction, social commentary and absurd surrealism? Well, on those long, lonely nights at his computer, he consoles himself with the knowledge that he’s never heard of you, either.

Thanks Ira! Up next on The Truth Inside the Lie: Nina Munteanu