The Truth Inside the Lie – Matthew Hughes

What Would Winston Churchill Say?

I spent most of my adult life as a freelance speechwriter, writing mainly for CEOs (they don’t mind spending extravagant amounts on themselves) and the occasional politician.  I didn’t know I was a born speechwriter until I wrote my first speech, while working as assistant to a Member of Parliament.  I discovered I had the rare knack of being able to hear a speaker’s voice and speech patterns in my head, then write the text so that the words sounded natural.

Mostly, I wrote bread-and-butter jobs, an endless succession of Chamber of Commerce luncheons and Rotary dinners.  Sometimes, I’d get to stretch myself:  twice, I was instrumental in getting an underdog candidate chosen for the leadership of the BC Liberal Party, back before it was taken over by Social Crediters, swimming away from the Bill Vander Zalm shipwreck.  (If, dear reader, you know nothing of that meshuggenah fiasco, count yourself lucky).

But in idle moments – in which the life of a freelancer abounds – I used to imagine writing for one of the great voices:  a Kennedy, a Diefenbaker, a Churchill.  I would never have wanted to write for Richard Nixon, by the way, but when I had to compose deeply conservative editorials for a weekly newspaper I edited in 1973, I did use to write them in Tricky Dick’s voice, and they delighted the paper’s right-wing owner.

After I became a fiction writer and started selling to the digest mags, one day I was casting about for a story idea, and up popped the notion of a time travel piece about some idealist who went back to 1940  to tell Winston Churchill how to shorten the war.  The concept wasn’t all that earthshaking, but the prospect of writing it in the first person, from Churchill’s point of view, with his voice in my head – I so wanted to do that.

So I did.  And sold it to Gardner Dozois, who was then editing Asimov’s.  The title was “The Devil You Don’t,” which gives a pretty good clue as to how Churchill reacted to the offer.  The story came out, got some nice review mentions, sank without trace.

I was happy enough with it.  I thought I’d captured that unique voice.  But of course I’ll never know, will I?

Every now and then, I daydream about running into one of the actors who’ve played Churchill – Robert Hardy did the best job, for my money – and talking him into reading the text aloud with all the right intonations and off-centre cadences.

The frantic sparks fly up into the November night like lost souls seeking safe harbor who, finding none, extinguish themselves against the unheeding darkness.  Or so I might write it if ever I should put pen to paper to tell this tale.  But I shall not.

The fire itself is confined by the blackened steel barrel.  I poke again with the gardener’s fork and another flurry of sparks shoots up, and with them scraps of burning paper.  By the flickering light of the flames I can sometimes see a printed word or two before they are consumed:  Alamein, Rommel, Singapore, Yalta. 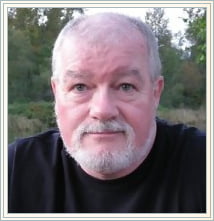 Formerly a journalist, he became staff speechwriter to the Canadian Ministers of Justice and Environment in the Pierre Trudeau government of 1974-79, then spent more than twenty-five years as a freelance speechwriter for Canadian corporate executives and political leaders. At present, he is seeing the world while augmenting a fiction writer’s uncertain income by housesitting.

He has won the Arthur Ellis Award from the Crime Writers of Canada, and has been short-listed for the Aurora, Nebula, Philip K Dick, Endeavour, and Derringer Awards.

His web page is at http://www.matthewhughes.org