On Loss – Thoughts on the Death of a Bird

If you’re wondering how a zoologist looks at the cycle of life and death, today’s guest may enlighten you. H. Leighton Dickson discovers that there is more to loss than despair.

It is a sad thing to wake up and look to the nest outside your window, only to find it overturned and empty. I am surprised, actually, at how sad it is.

Last summer, a pair of robins built a nest in the beams of our pergola. It was just above our deck table, and it was just high enough to avoid our two cats who sat eagerly below, or the three dogs who enjoyed pestering the cats. We spent many warm evenings watching the parents build and tend, feed and feed and feed. And feed. We watched with glee as little heads soon appeared — all wide yellow beak and scrawny neck. There were three chicks and we chronicled them as they grew from skeletal reptiles with wisps of sticky feathers to pretty little plumplings, taking their first daring hops from the nest along the beams. One morning, we found one dead under the nest and the mom sitting tight on the other two. The next morning, the rest of them were gone and the nest sat empty. Crows, I figured. We have a lot of them in the trees around our house. It was so sad, seeing the nest without the robins so we took it down, hoping to encourage them to choose a better, more sheltered place next time, and gradually, we forgot about them ourselves. It was, and always has been, the way of things.

This spring, this same pair found a better spot. A large white pine and from our balcony window, we had a literal bird’s eye view of the nest. It can’t be more than six feet away, nestled against the trunk, all but hidden, save from our vantage point. We watched the round mamma and sleek papa build the nest out of dried grass, watched them weave and pack, weave and pack. Then we had the privilege of watching her lay, although we couldn’t tell how many of those remarkable blue eggs she dropped. Over the next few weeks, we watched them take turns sitting, turning, sitting again and finally, when we thought it might never end, a return of a parent with a moth in its beak.

This morning, as I have every morning for the past 6 weeks, I went to the window, to the balcony overlooking the white pine. But this morning, the nest was overturned; upended and propped against the trunk. Empty. I went outside to look for signs of life or death, of splintered shells and struggling chicks, of blood or feathers or anything that might be a clue. There were none, only the nest in the tree, overturned and still.

Tonight I saw a yearling moose just down the road from my house. Spotted white-tailed fawns will be trotting through my yard soon as well, ready to dine on cedar and hosta and columbine. And even the squawk and flap of baby crows will be a sweet and comical reminder of the unrelenting, unsentimental, unilateral focus of life. That yearling moose may die on the road, but he lived through a very hard, long winter and a horrible, miserly spring. The fawns have plenty now but there are so many of them, and soon, the wolves will follow, keeping their number at manageable levels. And those crows – well, not much can threaten the survival of a crow. And there are still many robins.

My oldest daughter is coming home. She has been in Australia for six months and has finally decided to embark upon a career as a support worker for children with Autism. My son graduates next week from Grade 12 and is thrilled to be taking a lovely young woman to the graduation dinner/dance —Canada’s version of the Prom. My youngest, the wild thing, student council president and force of nature, is graduating as well, but from Grade 8, from Elementary into High. Big changes for my children. Big changes for me.

Every morning, I will see that empty nest. I will stop and think and be sad, but I’m a zoologist. Life is hard and then you die. But I am also an optimist. Life is a fleeting gift, precious and sharp and beautiful and rich. I hope I’ll look with clearer eyes at everyone and everything because of those robins, with just a little more care, just a little more wisdom and an unending, unquenchable, cup-overflowing supply of hope.

I can’t wait to see their nest next year. 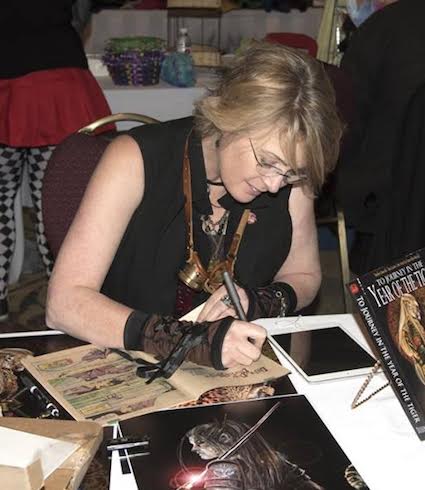 H. Leighton Dickson grew up in the wilds of the Canadian Shield, where her neighbours were wolves, moose, deer and lynx. She studied Zoology at the University of Guelph and worked in the Edinburgh Zoological Gardens in Scotland, where she was chased by lions, wrestled deaf tigers and fed antibiotics to Polar Bears by baby bottle! She has been writing since she was thirteen and pencilled her way through university with the help of DC Comics. She has three dogs, three cats, three kids and one husband. She has managed to keep all of them alive so far.

A Hybrid author, Heather has the successful Upper Kingdom series (Scifi/Asian fantasy) on Amazon along with the Gothic thriller series, COLD STONE & IVY published by Tyche Books. She also writes for Bayview Magazine and is a photoshop wizard when it comes to book covers.