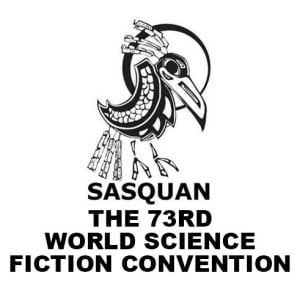 My second WorldCon has come and gone, leaving me excited for the next opportunity to hang out with my tribe. This con was a bit different from others I have attended as it was more about an escape from reality than any kind of networking or business opportunity. Because of the recent loss of my father and my sister, I had decided not to attend the 73rd World Science Fiction Convention but, thankfully, the Consortium of Ridiculously Kind Persons intervened and sent me on my way.

I was a bit sad that some of my favourite people were not able to attend. Andy Rogers, Sandra Wickham, Amy Sundberg, John Klima, and Chuck Gannon among them. I missed all of you! Ah well, next year perhaps?

This was the first time a big con was within an easy driving distance for me—and probably the last time too—and so I headed off to Spokane, Washington on Wednesday morning, eager for the festivities to begin. Just after noon, I arrived… at the wrong hotel. Who knew there were so many Davenports?

My terrible sense of direction would feature heavily through the entire con and I was grateful to make a new friend, Tanis O’Connor, who I latched onto as my human GPS whenever possible. I would like to blame the thick smoke blanketing Spokane for my problem but I managed to get lost both inside and outside the convention center sooooooo…thank you, Tanis!

It would take pages to give you the full WorldCon experience but I’ll share some of the day-by-day highlights.

Day 1 was spent reuniting with Breakfast Squad members Griffin Barber, Alistair Kimble, Rob Hicks, and Clint Lohse and drinking too many martinis and snort laughing. There was a LOT of laughing. If anything characterized this con for me it was the volume of much-needed, pants-peeing, soul-soothing laughter. I didn’t even know how much I needed that simple tonic until I was drunk on it.

Though I still don’t think my wallet is that funny. Velcro is practical!

Oh, and Alistair brought his wife Tara along this time, so I was finally able to meet my fellow Facebook cat-aholic in person. By the way, if you look up the word “elegance” in the dictionary, you will see a picture of Tara. I am dead serious!

We ended the night with a tour of all the room parties being hosted by cities bidding for the 2017 WorldCon. I had already decided to vote for Helsinki but, hey, a party is a party.

If you’re wondering, Helsinki won. What can I say? I have excellent taste! Congratulations to my friend Nina Niskanen and all the hardworking members of the Helsinki bid crew. Now I have to start saving for 2017.

Day 2 began in the best way, when I ran into one of my very favourite people, Howard Tayler of Schlock Mercenary and Writing Excuses fame. By the way, if you’re a new or aspiring writer, then you need to start listening to the Writing Excuses podcast stat! After breakfast, I actually got around to attending some panels and talks, albeit with a slightly fuzzy head. The Writing for TV panel was fun, especially since I had worked on a few of the shows that the panelists had written for and it was cool to hear from Guest of Honor, David Gerrold, who wrote the famous Star Trek episode “The Trouble With Tribbles”.

The biggest highlight, however, was artist John Picacio’s slide show. He discussed his process and shared some of his work and work-in-progress with the crowd. Stunningly beautiful doesn’t begin to cover it! Picacio is re-imagining the famous Mexican game Lotería, with a set of cards that is each worthy of being framed and hung on a wall. Clint and I went halfers on his first set of 11 cards and Picacio signed each of our favourites. 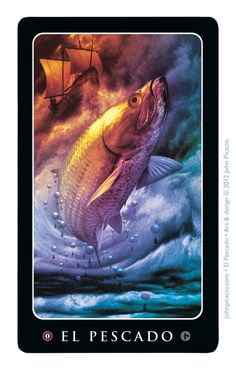 Clint enjoys his “Minty Clint”, made with Old Southern Predator

We ended the second day with a wonderful dinner at Steelhead, inventing a new cocktail, an animated group discussion about movies, and with more martinis for yours truly.

Day 3 was a mixed day for me. I was definitely feeling the effects of those martinis and despite my gregarious nature I am still an introvert and my batteries were in dire need of recharging. I attended a few panels. The panel on The Future of Government was noteworthy both for the quality of the discussion (thought provoking!) and for the gentleman seated next to me picking at his ankle skin and eating it (eeeewwwww!). I made it as far as dinner and then crashed early—did I mention I also started my trip with a cold? Boo!

Sadly, my early evening meant that I missed the Fairwood Press party, hosted by my friend Patrick Swenson with friend Tod McCoy also in attendance, but they know I love them. Right? RIGHT?!

The high point of this day was not at the con but at the nearby Boo Radley store, which Clint, Tanis and I stumbled into quite by chance. There were repeated cries of “Look at this!” followed by guffaws as we found one hilarious item after another. The three of us decided the Boo Radley store was our favourite panel.

I bounced back on Day 4 and this was the best day of all for programming because of Super Science Saturday. Along with some science exhibits and demos in the main area, there was also a series of talks given by experts in a variety of fields. My favourite was the macro-evolution talk, which was fun, enlightening, and made several references to the movie Avatar!

We shall not discuss the Spintonics talk, which, though fascinating, was far far above my level of comprehension.

Tara is horrified by Mark’s story, as were we all.

I missed lunch with the gang, including the effervescent Jennie Faeries, but caught up to them in time to share our worst airplane stories. Though Mark Van Name’s story won, hands down, I will not repeat it lest you all wake up screaming in the middle of the night.

I attended the Writing About Controversy panel with some trepidation. Given the recent brouhaha in the SFF community, would this turn into a mudslinging competition? It did not and it was refreshing to see a civilized and thoughtful discussion for a change. Would that they could all be so.

Directly related, this was also the day that the Hugo Awards happened with all the attendant drama. My goal for this event was to be happy, so I kept a wide distance from all things Hugo. I will only say that I am sad for those that could and should have won awards and for SFF fandom in general.

I passed the not-attending-the-Hugos time with friends, including Mark Teppo and Lisa Gemino, discussing the plot for Breakfast Squad’s soon-to-be-best-selling novel about the blonde mafia. (You #totes don’t want to miss this one! #Iknowright?)

Back off! This is my party chair!

Post Hugos, I was welcomed to the Baen party, which was FANTASTIC! The room was, well, roomy, and Baen put out a great spread. I met some new and interesting people, found the best chair of the entire party, and may have enjoyed one or two more martinis.

On Day 5 I had to pack up and get ready for the smoky drive home. That left just enough time for one last laugh-filled breakfast and several goodbye hugs.

Oh and somewhere in all this I managed to exchange quick hellos with Dave Bara, Katrina Archer and Ron Friedman. WorldCon is just so damned big that it’s easy to end up not having enough time to spend with everyone you would like to spend time with. It was also a pleasure to meet Eric Flint for the first time. Eric is the founding father of the “Ring of Fire” universe, which begins with the alternate history novel 1632 and ripples outward from there.

The Biggest Thank You Of All Time…

Despite all the Hugo conflict and negativity that surrounded this year’s WorldCon, it will go down in history as one of my favourite cons. I say again: I did not know how desperately I needed this little vacation from reality—thankfully my friends did. I am forever indebted to the Consortium of Ridiculously Kind Persons, who paid for my entire trip–MY ENTIRE TRIP!– including a loaner car with a full tank of gas, (thanks, Helen!), and/or provided alternate offers of assistance. I still can’t believe they did that for me. *shakes head*

So, from the deepest depths of my heart and beyond I offer my forever thanks to my friends, family, peers, and fellow artists who made WorldCon 2015 a reality for me and returned a gigantic smile to a very sad face.

Thanks and galaxies of love to*:

*Apologies if I overlooked anyone, you know I love you right?