Culture and Conflict: What the Okal Rel Saga is All About

When we put out the call for guest bloggers, Lynda Williams was a natural fit. Her Okal Rel universe is fraught with culture clash. In this post, she talks about the many sources of cultural conflict in her books.

Readers who like their culture clash played out through characters where no one is 100% right about anything, will enjoy spending time in the Okal Rel Universe.

Imagine politically sophisticated high-tech invaders clashing with biologically empowered tribal leaders, known as Sevolites, who are, themselves, the advanced technology. Or a conquering Sevolite warrior who can’t understand why “take me to you leader” means a planetary referendum for AI-enabled egalitarians from Rire. And these are just the political teasers.

Sexual politics between the neo-Victorian Demish and the free-flying Vrellish generates humor and drama in every book. But no group is without its own kind of norms. Instead, conflicting standards duke it out in the wider Sevolite cultural context of Okal Rel, in which genetic capital is tied to economics through a spectrum of religious beliefs about the rebirth of souls. 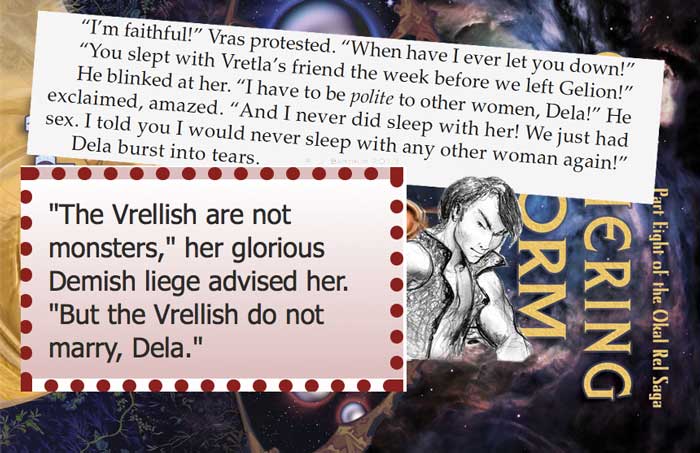 The agnostic humanist culture of Rire, founded on egalitarian ideals, has yet another set of rule governing sexual relationships and, in particular, adult responsibilities for raising children. Reetions are horrified by Sevolite use of infants as political pawns. But then, most of us would be as well.

Perhaps the most controversial question of nature vs. nurture in the ORU is just how different a bio-engineered Sevolite is, biologically, from natural humans. Does this entitles them to behave differently? If so, to what extent? At what point should multicultural acceptance give way to war, again? Because the differences concerned aren’t trivial.

For example, Vrellish women have as much testosterone in their blood as Vrellish men. And the gentle sensibilities of Golden Demish rest on a genetic predisposition that never had to stand the test of viability in the evolutionary sense. The notion there is any validity to racial stereotyping offends moral thinkers from Rire, but Reetions do not hesitate to view themselves as culturally superior – even though the lack of personal privacy in their transparent society rankles on most Sevolites. And what Sevolites consider a legal means of resolving their differences through Sword Law is murder, pure and simple, to someone from Rire. 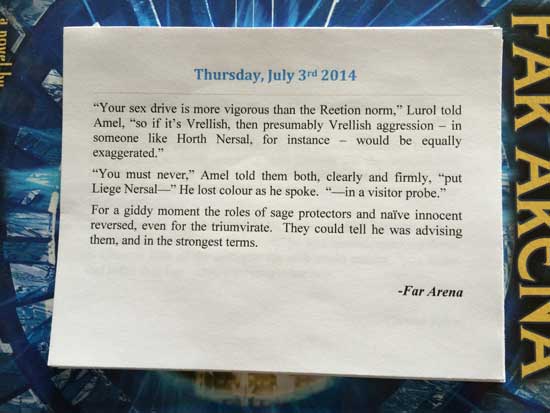 Lynda Williams is the author of the ten-novel Okal Rel Saga and world mistress of the expanding Okal Rel Universe. She will be appearing April 25, 2015 at the first Creative Ink Festival event in Burnaby, B.C. http://www.sandrawickham.com/creativeinkfestival/  and publishes at http://facebook.com/relskim  By day, Lynda works for Simon Fraser University and teaches part-time for BCIT.